Has it been a month? Really?

Goodness gracious. I'm sorry. There's been a lot going on, but nothing much has happened since I last posted. The biggest thing is that I made a quilt. Well, technically I made two quilt tops and quilted them together as the top and the backing of one quilt, but I'm not one to stand on formalities. The one with the black is the backing, it’s a quilt that I began years ago and added to to make it the correct size. 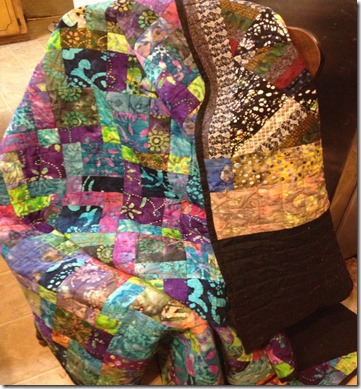 Colorful, isn’t it? I was aiming for a bright and cheerful coat of many colors look and I think I’ve achieved it. I've made three quilts in my life so far. The first is in Silly E's closet awaiting repair because he loved it a bit too much as a child, the second is slated to be tucked away because the fabric was given to me as a valentines day gift from Cave on the day he proposed to me. It's too precious for me to use every day, and since I used inferior thread for the quilting it’s already showing wear. My newest never seems to be where I am when I want to use it and I'm tired of schlepping it around. Obviously the answer is more quilts. I’m already on it. 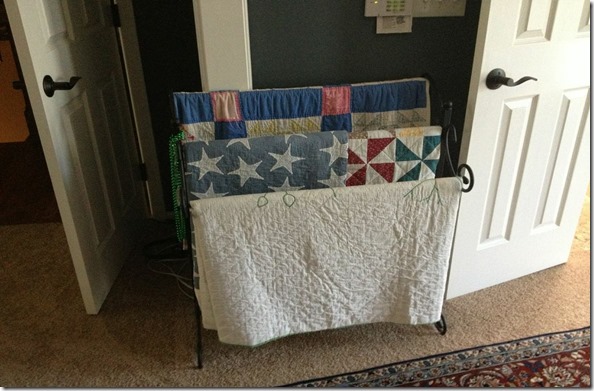 My grandmothers quilts. On top is one of her own design, in the center are a WWII flag, with 48 stars, my sister’s pinwheel quilt, and on the bottom is a whole cloth quilt with our family tree embroidered on it.

Quilting has a long tradition in my family. We are all makers, although my mother eschewed crafts and mundane activities and put her efforts into oil painting and flower arranging. (Yes, really. She both took and taught classes on arranging flowers and making arrangements out of dried things.) My sister and I have had to teach ourselves the skills mom didn’t care to retain. My grandmother began quilting as a young girl back in the 1900’s and like most quilters she was very frugal about her fabric purchases. She read an ad in the local newspaper for a damage sale on dry goods at a port in a large city two counties over, so my mom drove her. Mom said she was like a kid in a candy store. The fabric had water damage and they were trying to recoop some of their losses. They had big burlap bags that contained lengths of good fabric cut from otherwise unsalvageable bolts that they were selling for a penny a pound. My grandmother stuffed my mothers car full of burlap bags. She spent $1.08 on her bounty, we still have the handwritten receipt somewhere. When she got home she opened up her sacks and started spreading things out. Two bags were all garment fabrics, we still have some of the little suits she made for her grandchildren out of them. Others were mixed with some odd, heavy fabrics that she made into rag rugs. The majority of the rest was good old cotton, perfect for quilting. Some of the bags had been packed when the fabric was still damp so there was a bit of mildew to be reckoned with but grandma was very pleased overall. My grandfather, who was still carrying the bags in from the car, called out Gayle, I think this one has full bolts in it. Grandma met him in the living room, fairly dancing and clapping her hands at the thought of full bolts. Sure enough, it did. Two white and two in pepto-bismol green. Or, what pepto-bismol would look like if it were green. As they unpacked they found more bolts tucked in here and there. All the same green. She wound up with six bolts of the green fabric. They only had a little bit of water damage on the last two or three inches of one end and they were sound after the first few layers. She and my mother spent the next few weeks laundering and trimming away the bad spots on those bolts, carefully packing away the trimmed “scraps” and wrapping the rest back onto the bolts. Grandma and grandpa came from large families with lots of siblings, and the bolts of green were distributed amongst them. That green became legendary among our family, and not a single one of us has ever liked it. The younger generation calls it minty dismol.

That green was in some part of each and every quilt that grandma made after that, except for the pinwheel quilt that she and my sister made. Grandma hand pieced and hand quilted her quilts so she lived with each one for several months. She became heartily sick of that green cloth. She tried everything to use that up, selling it, trading it, giving it away, but she still had more, and she was too frugal to not use it no matter how tired she was of looking at it. My mom told me that grandma, ill with the beginning stages of breast cancer, walked to the neighbors one afternoon to call and tell her that she had made a very generous border and a quilt backing out of it and the green was all gone! Finally! Mom laughed with her and congratulated her in her endurance. When grandma was ready to start her next quilt she asked my mom to help her sort her scraps. Mom pulled all of the scrap boxes out from under grandma’s bed and noticed one tucked way back under there so she fished that one out too. She opened it and discovered the green fabric that they had so carefully trimmed away from the bolts. She and my aunt pawed through it and estimated that there was almost 20 yards of it in there. They spirited the box away to the trunk of my aunts car and she dumped it in a charity donation box on the way home. If your family has a plethora of things made from minty green cotton found at the thrift shop back in the 60’s you are welcome. Grandma passed away before she completed another quilt without the green fabric. She beat minty dismol, but it got the best of her. I wish I’d met her. All I know of her is from stories and her quilts. 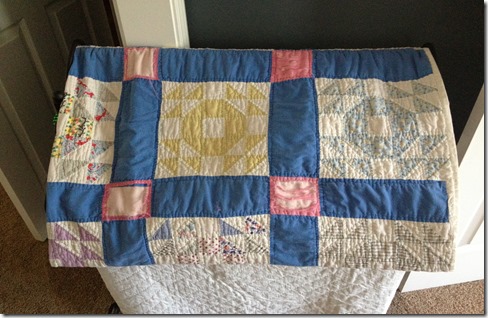 This is the first quilt my grandmother made from her bounty. The block is one that she designed, she took the center from the rolling stone block and placed it on a background variation of the broken dishes block. Rolling stone, broken dishes. The joke tickled her to no end, mom said. She used blue sashing between the blocks, pink corner patches and it had a wide green border. She used white diaper flannel instead of batting inside the quilt because she didn’t have any batting and she couldn’t wait one minute longer to make a quilt. She used the green for backing, and she bound it in green too.

Where is all the green I’ve been fussing about? Therein lies the rub. Look closely at the pink squares. See how they’re shredded, some to the point where everything is gone except for the stitched edges? Anything we had that was made with the green or the pink disintegrated. At my house it happened during spring cleaning. Mom filled the washer with a load of quilts and when she started pulling the quilts out of the washer we heard a sickening rip. The green fabric had shredded itself into strings that wrapped around themselves and the agitator. The four quilts pictured in the beginning are the only survivors that our family has out of all of the quilts my grandmother spent her life making. Grandma gave away more than she kept so I’m sure there are more out there, these are just the ones we know of.

My sister and I have been bonding over quilting. We’ve been having virtual bees each weekend, texting photos of our progress and complaining about curved seams and matching points. We live half the continent away from each other so our contact has been a phone call every few months and one visit in 12 years. I love connecting with her. She hates being tied to a phone so the fact that she spends so much time texting with me on the weekends indicates that she’s been enjoying it too. I asked her the other day how many big quilts she makes in a year, as opposed to little quilting projects like table runners. She said around 12? I think her branch of the family tree will be warm and toasty for a long time to come.

Time to go get ready for work. Monday is our busiest day and we’re usually slammed especially hard as we tow all the cars that broke down over the weekend. Hope your weekend was good!