We have a new family member 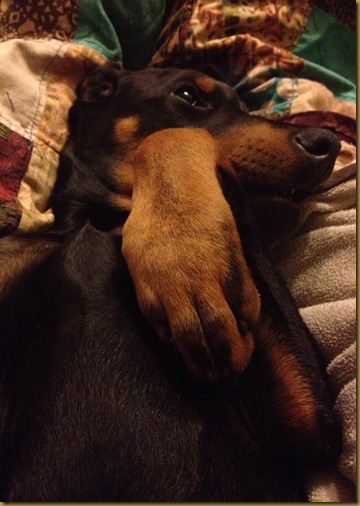 His registered name will be Valentino, but we’ve been calling him Rhye. We brought him home on Valentines Day, just in time for the entire family to be laid flat out with the flu. We’re just now getting over it.

Rhye, on the other hand, has had two clean bills of health from our vet clinic. I took him in the day after he arrived because I’m paranoid and then again yesterday for booster shots and he’s gained three whole pounds between visits. He’s also eaten his way through 2/3 of the bag of puppy chow we have, but judging by the thigh friction Roxy Rotunda has recently developed I think we all know where a good portion of that puppy chow has been going.

He’s a good boy. A bit stubborn about some things, he is determined to have his way with any and every tissue he sees, but he learns quickly and willingly. It took him all of one afternoon to learn that if he slapped the floor with his butt good things happened, and he’s proud to show that skill off. Fortunately he enjoys ear rubs and chest scritches and willingly accepts them as his reward a good portion of the time. Before I was stricken with the flu he was getting the concept of down but studiously ignoring No. I was able to do a little work with him tonight and he showed that he’d retained a good amount of what he’d learned before I got ill, and he was even able to learn to focus (make and hold eye contact with me) within ten minutes, and that’s something I hadn’t worked on with him before.

It took Rhye a while to decide that this was home. He is older, a few days shy of 12 weeks when we got him, so he was with his mom for longer than I would have preferred and the whole new people new house thing confused him at first. The breeder is also in the process of moving and was unable to socialize with him as much as he normally does older puppies. He had been handled twice a day at inspection times but other than that he wasn’t really played with or worked with. He quickly discovered the joys of the easy chair and his spiffy new jacket but it took a few days and a couple of dehydrated chicken gizzard noms before he decided people are where it’s at. 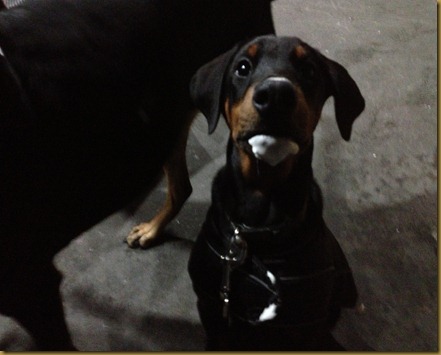 I was hesitant to get another puppy so soon after Hag passed. I was concerned that he would be compared to Hag and found wanting. Comparisons have been made, it’s inevitable and would have happened regardless of how much time had passed, but they haven’t been unfair or negative. More observations than anything else. He’s more clutzy, he has the same scampery trot, his paws aren’t as big, no, they’re bigger, nah, they’re the same size as Hag’s were at his age. He likes being petted and snuggled more, he chews more, he squeaks when he yawns, he’s learned to drift when he corners at full speed on linoleum. He isn’t sick. That’s the big one. He isn’t sick. Silly E came to me after a day of hurling and headaches and said if I have to choose between the family getting sick and the puppy getting sick, I’d much rather we get sick!