I’ve been watching Linoge and some of his followers go round and round on twitter with anti gun people about the incident in Colorado. I even chimed in, although, as is typical, it was a day late and a dollar short. The exchange that captured my interest was some yahoo who kept harping on the rate of fire, even going so far as to say that the AR used qualified as a full auto weapon because the alleged perpetrator was quick on the trigger and had a high rate of fire. He declared that his convoluted 2A misinterpretations gave him the right to decide what weapons are allowed because he has the right to regulate a militia… I lost interest in trying to navigate his convoluted asshattery and clicked away.

While I was still reading he said that no one needs to have a gun that SPRAYS bullets that fast. I believe he kept quoting 71 bullets in less than 2 minutes. He’s wrong. My state mandates that you must pass a timed range test and your accuracy must be 70% or better (35 out of 50). The times vary from 5 seconds for 1 round from the ready position to 8 seconds for 2 rounds from the presentation position. There are also two outliers, 1 round from the ready position in 12 seconds and 1 round from the presentation position in 15 seconds. My little calculator and I added it up, 50 rounds in 167 seconds which includes drawing your weapon from the presentation position 14 times. This is the minimum required here to be considered a safe enough shooter to be allowed to carry concealed. This guy is sending spittle flying over an AR SPRAYING bullets while I’m required by my local government to be able to do just that.

He also was flogging that guns are for killing. Yeah, they are a tool designed for that, and thank goodness we have them. While my pistols were all new at the time of purchase all of my long guns were purchased used so while I have not killed anyone I have no idea if or how many of my guns have. I suspect quite a few, considering I personally own a WW1 Military rifle, 6 WW2 Military rifles, and a Korean era Military rifle. That is one of the reasons that I choose not to own weapons that were used by countries that fought against the US and our allies.

Speaking of my rifles, I’m going to get off the computer, scrub the dickens out of my mosin and do some of this: 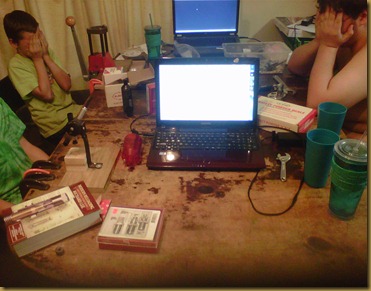 The family that reloads together… In the green tie dye we have Monster Girl, in the light green we have Monster Boy, and the scruffy charmer on the right is Silly Eggplant. Trust me when I say they’re a good looking bunch of kids. 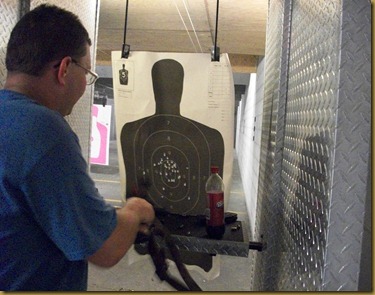 I’ll leave you with a picture of my husband Cave preparing to bond with his WASR last year. The target was mine, it was my first time firing the AK. Not too shabby.

This and that and battening down.

I subscribe to many blogs. One of them is written by North, another is written by a man in Alaska, titled Way Up North. I subscribe because I enjoy their content, but my dirty little brain gets quite a kick out of the titles.

We’re preparing to be pounded by the storm that has been making it’s way down the eastern sea board. It went through my m-i-l’s area yesterday and she is without power, although she has her genny running and will be fine. That woman is a force of nature and it takes more than a power outage to get her perturbed.

I’ve done the best I could to prepare the garden for the storm, I harvested what I could, even if it was a few days from being ready, to try to spare the plants from damage. The eggplants sprung up by a foot just from that. Unfortunately my pimento peppers have snapped off and the tops are gone. I’ll have to find some more seed as these five were from a trade and I planted them all.

We planted apple trees yesterday (Anna and Dorset Golden) and I anticipate they’ll be fine even if they are knocked down or uprooted because they haven’t had time to root into the ground. I am worried about my potted Meyer lemon and my dwarf blueberries, I have them tucked up next to the front porch steps so hopefully they’ll be fine. The last time we had a high wind storm blow through we had a “barrel roll” event, as insurance called it, that rolled through our neighborhood and exploded our neighbors windows, peeled some shingles off of our house, and picked up a 10 foot tall, 300+ pound yard art windmill and spread it across our yard like butter.

Hope you had a good weekend!