DrJim's step-grandchild appears to be fading. I'm very sad to hear it, and my thoughts and prayers go out to he and his family at this time.
To the young man, I ask for peace, light, and freedom.

DrJim blogs at Every Blade Of Grass.
http://every-blade-of-grass.blogspot.com
Posted by Garand Gal at 7:44 AM 1 comment:

The new cord arrived today (YAY!!!) but the video card is still wigging out (Boo!!!) and I had to reboot the computer twice while trying to answer comments (Hiss!!!) (to the reboots, not the comments!!!!) so I'm resorting to posting on my phone again. I can post from the phone but I haven't been able to figure how to see comments, much less reply to them. Guess it's going to be a weird hybrid thing until stuff gets figured out. Yay for technology?

Dr Jim. I have had the jack pull off the motherboard before and it's definitely something that takes a skilled hand to repair. This time it was just the cord. I figured it was on its way out when I noticed cracks up and down its length about a month ago.

Laura, yes the dogs often do accompany my into the ladies, but our master bathroom has an attached walk-on closet that they like to lay in so they're not quite as up in the business as that sounds lol

The kids started a three day weekend today so when they got home I put them to work instead of chaining them to their books. The car was cleaned out and vacuumed, meat was thawed and browned, onions were chopped, beans were rinsed and drained, laundry was folded and dishes were washed while Silly E and I sawed some double wide pallets in half lengthwise to make a fence for my front bed. I'm planning on painting them and filling them with soil to make a vertical garden. Even in its raw state it looks better than the rolls of wire and picket fence we have had for the past few years. I took that fence apart and plan on using the pickets for a hugelkulture bed and having Cave use the wire to build a trellis for grapevines.

Rhye starts his puppy training class tomorrow and I have a full day planned around chauffeuring kids, dogs, and digging through the shed for paint for the fence. Hope you have a great weekend!
Posted by Garand Gal at 9:28 PM 1 comment:

My laptop is barely hanging in there. The power cord is on the fritz so it cuts off if I do something so dastardly as pick it up and move it and a gentle bump, sometimes just typing too hard, sends the video chip into fits that often require a series of reboots to get it to settle down and run right. I have a new cord on the way but the video card means it's going to have to be replaced sooner than we had budgeted for.

In the meantime it's set up in a puppy/kid bump-free location that also happens to be inconvenient and as far away from daily life (and the router) as physically possible. Using it right now is about as enjoyable as listening to Feinstein speak at an Occupy gathering without the pleasure of decking myself out in all my NRA and gun positive gear.

I was able to find a blogging app for my phone that works but it's not without its own issues. Blogging will continue, and the pace may even pick up, but content will probably be light.

Speaking of blogging, Google is retiring their rss reader. I managed to export my list to the laptop, hopefully I'll be able to get it set up with a different service when I'm more reliably online. In the meantime I miss y'all.

There really hasn't been a whole lot of interest going on lately. We've been working on cleaning up the yard, weeding and pulling out saplings that have sprung up everywhere. Rhye accompanied me to a local botanical park that offers free composted wood chips and didn't get freaked out when they bellied up the front loader and filled the bed. Even at just Four months he's turning into quite the truck dog. Roxy tries but she gets freaked by the way the truck sounds and how it's old suspension jolts around so she curls up tight on the seat next to me and refuses to move. She's just too big to fit there and interferes with the shifter so she'll have to stick to car rides. Rhye lays his head on my purse, puts his back against the seat and lets those big paws dangle.

Rhye is pretty much my constant companion, meaning he is ALL up in my business just like a good doberman thinks they should be. It reminds me of having toddlers again. We planted some trees, a peach and a plum and he thought the digging was so much fun he kept on, even after we filled the hole.

This morning I futzed with a come-along and the miniature compressor to try to convince the bead to seat on the wheelbarrow tire, and he thought that was great fun too until the air shot out the side right into his nose.

With the barrow out of commission I backed the truck right up the the bed and started unloading. He cavorted around scratching, digging his snout in and flinging it everywhere. He didn't even mind when the forks full landed on him, but after a while his attention finally wandered and we were able to unload mostly in peace.

I'm doing the back to Eden deep mulching again this year so this truck load was enough to fill the bed i have earmarked doe peppers/beans to the 8 inches I wanted with just enough left over to mulch around the blueberries. I'll need another two loads to do the rest of the beds and trees that I already have, and I want another two to make a new bed or two. Hopefully they have enough compost and I have enough gas. Either way, There will be lots of busy in the next few weeks!

On the plus side I discovered that a weed I've been battling for years, Florida Betony, aka rattlesnake weed, has edible tubers and its prime harvesting time for them right now. I think I'll be slicing and frying some for lunch today. 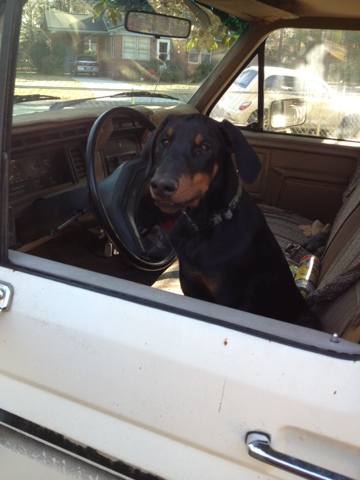 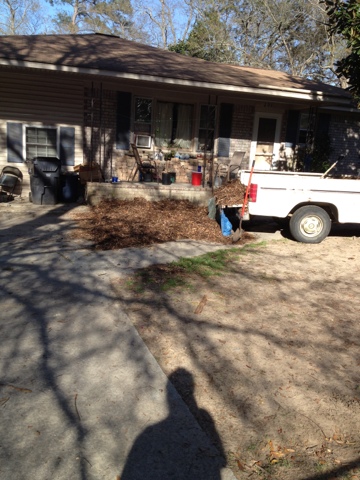 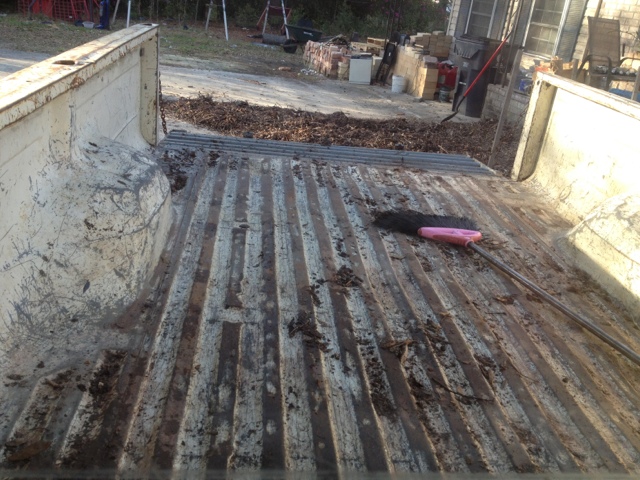