While I was looking around at handguns (I even went, alone, to gun stores!) I had seen a few Garands for sale locally. I had lucked out and found a good source for textbooks so I had extra money from my grants and loans. One day after class I walked into the gun store by myself and said I’d like to see your Garands. They showed them to me and I found one that was in good condition that I liked very much. A ‘50’s era International Harvester with new furniture. I pulled out my debit card and said I’ll take it. He took my info and my card and ran the checks and I walked out with my very-own-all-mine-I bought-it-my-own-self rifle. I was nervous and sweating and exited the whole time he was doing the processing, and I couldn’t believe I passed. They were going to let me have my gun! On the way home all I could think was what have I done? OMG I have my very own gun! Whoa, how did that happen? It’s all MINE!!!

That right there was the most empowering thing I have ever done. I bought a gun. Me. I didn’t ask if I could, I didn’t have to argue and fight and plead, I just did it. My husband didn’t even know until I walked in the door with it, and I was hesitant to show it to him on the irrational fear that “they” might change their mind and take it away. I’ve done the deed several times since then, buying the kids their rifles and picking up a mosin-nagant, but there is always that little seed in my mind saying this time they’re going to figure out it’s you and you‘ll get denied. When it comes back approved that big relief and the little thrill of I did it! still feels so good. At our last gun show I bought my version of THE gun, a nickel plated Rock Island 1911 with pearl grips, just like the Colt my daddy had. I held out for years to go back to the gun store that turned me away but I can’t afford the trip nor can I afford a Colt. I’m okay with putting my own spin on it. It shoots nice, and it’ll sure look good in my daughter’s collection some day. 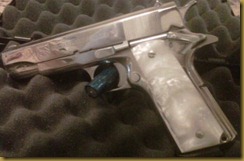 I know my story is a mess, skipping all over the timeline, confused and repetitive and unrefined, full of doubt, contradictions, a rat‘s nest of stream of consciousness tangles, but it’s about as linear as I can force myself to think in regards to the events. I thought about editing, refining, fixing, but it’s not broken. Refining in this case would simply be an attempt to make it nice, and it isn‘t nice.

I do know why I wanted to tell my story. I realized I wasn’t so much respecting the girl’s privacy as repressing my own feelings about what happened to me. And yes, I was not raped, I may have fought my ass off and won and in the process saved all of our lives, and no matter how much I don’t want to think of it and no matter how many times I said no, NO, I’m FINE over the years, it did happen to me. It was bad. I was attacked and victimized, both during and after the incident, and I am a survivor. My life was in danger, and I could have gone to jail for what I did. But I didn’t do one damned thing wrong.

With all the work I’ve done on mindset, knowing that I am extremely valuable to my family and I am worth every scrap of effort to protect, and I really do believe that, and knowing with every fiber of my being that I am prepared to kill to protect my family and myself, I still have to tell myself I wasn’t wrong back then. Doing my level best to maim and kill those bastards was exactly the right thing to do. I have a difficult time wrapping my mind around that, even now. To the last vestiges that remain of the innocent I was back then it sounds wrong, we’re taught to be kind, turn the other cheek, don’t hurt people. That works in normal society, in normal situations but I think you’ll agree that self defense situations are about as far away from normal as things get. As much as I was their victim, I have victimized myself all these years over this incident. I think I’m ready to be done with that, too.