What would you have done?

Right now I’m elbows deep in the final processing of this gorgeous guy: 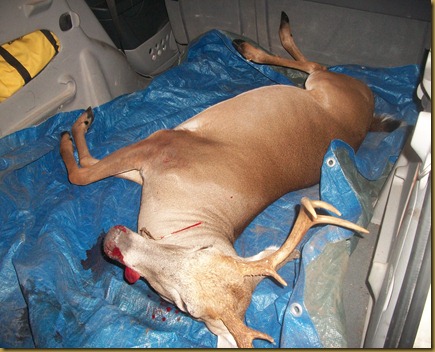 He still had grass in his mouth. My friend thinks he’s an old buck because he says his teeth are missing. I’m not so sure, he’s not really familiar with deer and their dentition so I think he was looking at the gap that doesn’t have teeth. By the time I thought to check I was unable to get his jaw open so we’re going to have to wait until after the insects have had their way with the skull.

The meat has been aging under ice in my coolers for a few days and finally felt ready tonight. I’ve already cut the backstraps into steaks and I saved some of the neck for soup but he was about not very tender so the majority is being sliced for jerky. It’s taking a bit of doing but I’m almost done. I just have the right fore and rib cage left to process. The dogs are so stuffed full of trim that they can barely stay awake long enough to lift their heads. Oh, and I’m not taking the fact that he’s tough as an indication of age, I’ve found even young bucks get chewy once they get a good case of testosterone poisoning.

While my hands have been busy my mind has been wandering. I’ve never drawn my weapon in self defense, but I’ve been reviewing some things that happened fairly recently that were uncomfortable. Since scenario review is something a lot of people like to do, I thought I’d share. Opinions and suggestions are welcome.

Last spring we were at the local BigBox Vision Center buying new glasses for Monster Girl. She’s a beautiful 10 year old child and the technician was complimenting her on how pretty her eyes were, then it was her hair (it’s long, she’s never had her hair cut) and then he kept asking her to turn around so he could see the butterflies embroidered on her back pockets (he did this at least three times) and telling her how cute they were and how pretty she was, did she wear make-up etc. I saw red flags flying all over throughout the conversation. One of them being that when he was doing the store spiel he was using a normal tone of voice but when he was complimenting her or asking her to turn he was using a very quiet voice. I assumed so it wouldn’t be picked up by the surveillance. Another was that he waited until I appeared distracted with my other children or my phone before he said anything, not realizing that I was texting the things he was saying to my husband and that as a mother I can pay attention to several things at once. When I didn’t give him any indication that I’d heard, he started saying more and more things to her.

Unfortunately it was closing time and he had already sent the other technician home before we started the process otherwise I would have asked someone else to take over. When it came time for me to give him our personal information I handed him my concealed permit and told him he could copy the information off of that. He looked at it, then back at me, and said “Oh…you have a gun?” I replied “several, and I carry them 24/7.” I also made sure to hold my elbow in such a way as to allow my XD to clunk against the chair when I leaned back, and I did not remove my eyes from him for the rest of the time we were there. He processed the transaction, handed everything back, said they should be here in 7-10 business days, they’ll call when they’re in, and got up and left without looking at me or my daughter again. He was in such a hurry that he made several mistakes and they had to refigure the bill when the glasses came in.

I would like to point out that I didn’t say anything directly because he hadn’t done anything that couldn’t be played off as a misunderstanding, nor did I feel that he had done anything prosecutable. I got the feeling that everything he said and did was carefully managed with that in mind. I believe that my message was received loud and clear though. I also didn’t want to scare or upset my daughter. Later I asked her what she thought about him and she said she thought he was weird because he liked the embroidery, but she didn’t seem to have picked up on the creepy vibe. We had a discussion about inappropriate attention and she was able to pick out some of the red flags when she thought about it. She’s starting to pay attention because when we were at a different store a few weeks back she whispered “Mom, that man is looking at you” and I looked and caught some guy reading my t-shirt.

I spoke to the manager of the vision center about creepy guy the next day, who told me that he was from a different store and was just filling in while someone was on vacation but she made some phone calls and he was taken off of her schedule. I don’t know if further action was taken.

I babysit twin girls that live in my neighborhood. One day the girls were in their room playing and I was walking into the kitchen when I saw a car I did not recognize with a driver whom I did not know pulling into their driveway. I went outside immediately and stood, hands on hips, right in front of the driver side door so he couldn’t open it. He had the wrong house and I sent him on his way with a nope, no one here by that name, no I don’t know where that house is, it’s time to go now. Not even ten minutes later I got a call from the mother I was sitting for, he was looking for a mutual friend of ours (we all know her by her middle name and I didn’t recognize the name he was using for her) and she called the mom to let her know how funny he thought it was that I wouldn’t let him out and how afraid I was of him. He assumed that I was afraid because he is a large, muscular guy full of tattoos. I did get a warm fuzzy feeling when I heard that the lady he was looking for told him that it was highly doubtful that I was afraid and he was smart to have stayed in the car because “She doesn’t play around.” Considering she’s a deputy sheriff in the next county over I take that as a compliment.

I’ve procrastinated enough, back to the task of filleting the silverskin off and slicing the jerky. *sigh*