Can we export them to Canada?

I found this on whotalking, a website that searches for key phrases being used in social media, mostly twitter and facebook, while I was helping out a local to me blog. I found it quite disgusting. 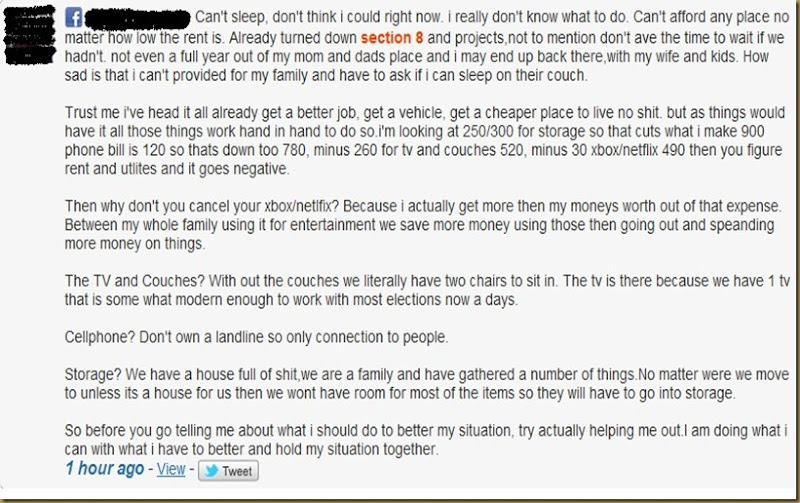 I took the liberty of looking the poster and his wife up on facebook. They don’t appear to be criminals, drug users or dealers, nor do they seem to be scamming the system but the fact that they turned down section 8 housing indicates to me that they are on the dole.They also appear to focus almost exclusively on entertainment and feeling bad because they don’t have enough money. His profile picture is of a collection of more than a dozen nerf guns, several of which I’ve seen in the store for $40 or more. He has broadcast for a ride to work half an hour before he’s supposed to be there, appealed to facebook for someone to cover his shift because he had an upset stomach, and he has passed on to his facebook friends that he’s both looking for a rental in the $500-$550 range and that he and his family are looking for a roommate to pay $550 in rent.

I don’t think he’s working to better himself or his situation, unless spending money you don’t have to feather your nest with toys, games, and other things that you can’t afford and don’t need while depending on a roommate or parents to pay your bills is the new bettering yourself. They’re in their thirties yet they’re acting like teenagers and thinking like parasites. Get over the lifestyle you think you’re entitled to have, sell your stuff instead of storing it, get a moped for cheap work transportation, move into housing that fits your income, and work your ass off to get you and your family out of there. Don’t ask your parents, roommate, friends or fellow taxpayers to subsidize your needs so you can focus on your wants, and every single thing he listed is a want. Get your priorities straightened out. Listen to the grown ups trying to tell you what to do instead of telling them to shut up and take care of you. Set aside your childish attitudes and be the man your family needs you to be.

I really fear for the future of our country.