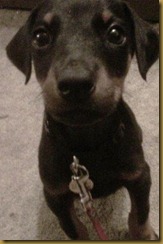 This is the little face I’ve woken up to all week, although when I first see it it’s crinkled up and crying at me from the other side of the crate. I’m going to refer to him as Hag on here. Mainly because that’s his name.

Hag came home last weekend, earlier than we’d planned. This was his mom’s first litter and she decided she was done with nursing puppies and their sharp little teeth. One of his brothers was the unlucky recipient of an overly emphatic “get away from me.” Needless to say the breeder weaned the litter early. Poor little guy was a cute one too, we almost chose him instead but he was a blue and they can have issues, besides, Hag has the personality traits I was looking for and the blue boy was a bit shy. Once the pups were doing well on solid food the breeder called us to come get him. We picked him up 2 days shy of his 6 week birthday, and it’s been quite the trip.

He’s very much like a human newborn at this stage, noisy, sleepy, he’s on a 2-3 hour schedule, he focuses mainly on eating and pooping, and let me tell you he’s got that last one down pat. Boy, does he. The biggest difference between Hag and a human baby is that he can motate his little self around faster than I can and unlike an infant he does not stay where I put him. By the time my babies reached the “I’m faster than Mommy” stage they had achieved a certain level of language understanding and recall capability. Him, not so much. On the up side, I have a leash and he likes treats so much that he learned to answer to his name and how to sit this week. Major accomplishments considering he…well, you’ll see. Another bonus is that I can pop him in his crate and take off for a while and no one will get their undies in a wad. Except him.

This week has been a shit storm. Literally. He may not have had a good mom but she did give him a parting gift, and he’s been sharing copiously. I carefully scoped out the breeder and cultivated a relationship with him before entering into a contract for Hag so since he’s become ill we’ve had excellent daily communication via email, text messages and phone calls. He’s got the situation covered like any responsible breeder should, although as was stipulated in the contract I did have to haul him back up to get looked at and medicated rather than going to my local vet. Fortunately the storm is subsiding, but the sleep debt keeps building. Someday I hope to talk to him about things other than what emerges from Hag.

I had planned on writing up my thoughts on dogs and defensive situations but you’ll have to wait because my brain is mushy from this: 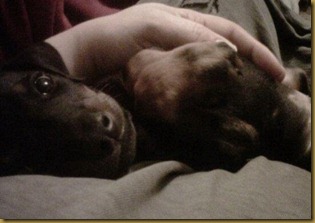