Sorry I’ve been a bit slow posting comments and in posting lately. I’ve been ill but I’m feeling better and I think I’ll mend although this taking it easy stuff is for the birds.

Let me see…there really hasn’t been much going on.

Haggie says hi. He’s doing well, he just turned 6 months old and as you can see he’s grown a smidge. The AKC finally sent the litter paperwork to the breeder and he’ll have an official registered name and a number assigned to him soon. What do you think about that Hag? 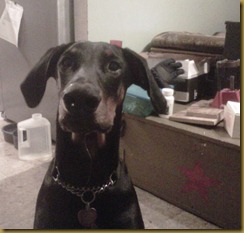 I think you should put out with the popcorn is what I think. Please excuse the clutter, we’re getting ready for weekend family reloading time.

I have been talking to Hag’s breeder and am considering joining a local schutzhund club. He’s been showing excellent instinctive behavior, enough that his breeder wishes he’d kept him, but I’d like to refine them a bit more. I’m hesitant to get into the local schutzhund club because they are heavily into competing and I am wary of the costs, but maybe it will improve the view around here. 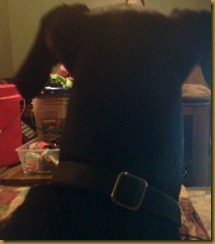 He’s helping me supervise the kids while they clean up the living room.

The other day I decided to do some bonding with my 1911. I’ve been carrying it quite a bit this summer but haven’t taken the time to really take it apart and say hello. I’d just managed to get it field stripped and was starting on the firing pin when our gunsmith called asking if we have any .30 cal on hand and if so can we drop it by the shop. Well then. I put the 1911 back together while Cave dug out a box and off we went. I got to visit my beloved carbine, my very first gun, and hopefully it’ll be back home soon. It had been having extraction issues and the bolt was in shoddy condition with peened spots on it so the gunsmith has been going back and forth with a local machinist getting it set to rights. I asked who he’s using and he told me, turns out his machinist was my partner in the reloading class that I took last fall. I’m pleased that my bolt is in his hands.

It’s been raining some so the garden is starting to produce again, although I’ve lost almost all of my tomato plants to a blight-wilt-bacterial thing. Today I picked 4 young eggplants with some insect damage, a handful of my crowder peas, and one dragons tongue green bean. There wasn’t really enough of anything to do much with on their own, the dragons tongue didn’t even make it into the house. I diced up the eggplants, shelled out the older peas and snapped the younger ones, did a slow wilt in some olive oil and kosher salt until the eggplants were just done and tender, turned the heat up until the peas and snaps got a bit crispy, then tossed in three small minced garlic cloves, shut it off and let the residual heat mellow the garlic. I know, eggplant and southern peas?? What was she thinking?? The eggplants took on a richness reminiscent of mushrooms, the starchy peas added a nutty flavor and a toothsome texture, and the snapped peas are like sautéed green beans. It’s savory and good. I plan on serving it on some toasty garlicky bread rounds, it should make a nice compliment to the pressed chicken thighs that I have in mind for dinner.

Speaking of dinner I’d better get on it, the natives are complaining. Hope this finds y’all well and happy.